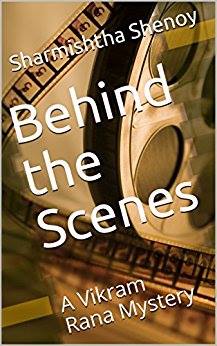 What is this book all about?

Behind the Scenes A Vikram Rana Mystery is the story of the fading super star of the Bengali film industry Ryan Gomez who is poisoned to death while shooting for the film in Darjeeling. Sheila Dhar the female lead of the film and his love interest with whom the engagement is broken is the chief suspect of his death. Sheila commits suicide and is rushed to the hospital in Kolkata for treatment. The police thinks Sheila Dhar and her mother Jaya is the prime suspect and they want to shutdown the case. The case is shifted to Kolkata CBI for further investigation where Vikram Rana investigates the case with inspector Lobo. Will they able to nab the killer?

The language is simple and easy to understand. I loved the choice of words which was used in the middle of the book. The different places of Kolkata and the famous food joints have been researched and described well. The cover of the book is simple and the title is apt for the book. The suspense was built in every chapter and there were no loose ends in this book. The author had done the characterization well specially the character of  Vikram Rana where he  nabs the killer through his research and detective skills. The last chapter is written so well and it is described in a detailed manner where it showcases everything in terms of life.

It is a good read for all the crime/thriller lovers and I would recommend this book to everyone.

Grab a copy from the link below: